Putting Down The Foil 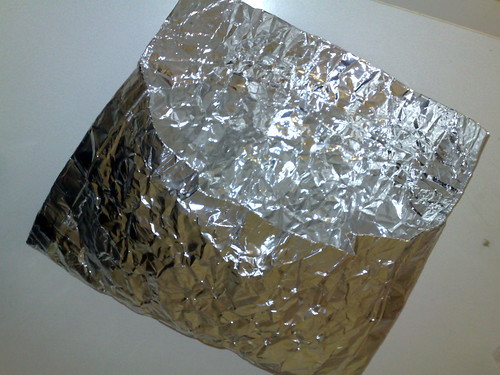 I despise conspiracy thinking, and not because there aren’t any real conspiracies out there. Following the thread of the CIA in the 50’s and 60’s and you find plenty of backroom deals darker than any la Carrè novel. Yet you don’t see people who subscribe to conspiracy theories that don’t believe the entire slate. Every anti-semantic bit of slander gets mixed in a slurry with aliens, lizard people, chemtrails, mind control, and every other bit of nonsense that you can pack in your brain with a really good bag of weed and trusting your night to the YouTube algorithm.

When you can dress up the world in the simplest connotations of good and evil, not to mention casting yourself as an enlightened seer, everything is easy to deal with. It’s not that there’s a perverse economic inventive at work where people want low prices on goods that drives a manufacturing and trade policy that reinforces wealth inequality. It’s that a group of world leaders is conspiring to destroy the country’s economy to make way for martial law. It’s not that Aspergers and other related diseases were reclassified as Autism as the symptoms and underlying causes were unified into a spectrum disorder. It’s vaccines, and the runaway profits of the pharmaceutical industry ensure only the brave celebrity bloggers can tell the truth.

It’s not that the world needs saving for Democracy, it’s that the US has turned defense into a jobs program, and toppling regimes is an easy way to open up new markets. Wait, that one has a kernel of the truth. And the Orange-Faced Shit Gibbon is the first President to admit how it actually works openly. The idea that institutions are corrupt and untrustworthy is the seed from which conspiracy culture grows. It’s birthed in cultures that feel their political power waning. Americans think that their government doesn’t listen to them, and political and economic power is moving farther away from the individual.

Digging in on any of these massively popular theories and you find the same thing. Complex and difficult to parse problems are turned into the third act twist of a b-movie. They’ve grown in popularity because social media has allowed people to swallow almost anything as an authoritative source. Your Aunt Rita is on the case to find that all those protesters around the world are just paid by George Soros to make Trump look bad. Your Uncle can tell you for a fact Putin personally has blackmail on Trump and is driving the administration from the Kremlin.

Researching what’s going on involves multiple sources and tracking the information back to an original source. Most people are so bad at this half the things they share all day are easily debunked by a simple search of Snopes, who graciously with sources show you your fallacies. A lot of this turns out to be the side effect of giving everyone a microphone when most people, even those deeply passionate about politics, don’t know anything.

Picking a side of the culture war and cheerleading them isn’t being informed, it’s being an operative. Letting the algorithm form that worldview into a tight set of blinders that ensure you have no idea about what’s really going on is called being a stooge. Neither is a good look.

However, it does feel to them like all this scrolling isn’t idle entertainment. You’re doing something, and you’re part of the solution. That solution is vague and undetermined, and you can’t explain it without ending up just stringing slogans together. You’re educating people and helping them see the stark truth they are hiding from everyone.

There is no real way forward from here. Algorithms are game-able. So no matter how many times we go hat in hand to Twitter and Facebook and ask them nicely to stop letting any idiot pretend to be a news source, it’s only a matter of time before the same shit pops back up. If they get into the business of calling balls and strikes on misinformation, they end up in the middle of the culture war. Also, they aren’t the only ones complicit in this.

The media has made almost the entire landscape op-ed, thinking that commentary is just as good as information. This isn’t a left-wing or right-wing thing, this is a conflict, and cheerleading sell clicks thing. One of the best business models in media right now is the right-wing media sites. They have spent three decades ensuring that their tight sphere of influence is the only place their audience will trust. It’s made them a raging mob easily exploitable by a demagogue, but hey they’re paying the bills and then some.

The consensus reality was a Mid-Century fiction, and like Hays Code Hollywood, it’s bruised people’s brains. News prior to the brief period where three companies controlled the flow of national news was a battlefield. Most of the newspapers across America have party names on their masthead because we’ve been here before. The party bosses of yore were just playing different games than the mix of grift, hate, and stupidity we’ve got roiling across our screens every day.

Making the world simple to understand is always going to be the game of con men. Nothing is simple; everything is complicated. Anyone who tells you everything can be simple is trying to put his hand in your pocket. That’s as close as I’m getting to ending this on a high note, trust me, I tried.