As a side effect of not getting much time to write, I have a pile of unreviewed books I've been reading this summer. A few of them are relatively slight, fitting a digest of quicker reviews than entire standalone reviews. (I'm also rolling up all of the reviews under the Médiathéque banner from here out.)

To Rouse Leviathan by Matt Cardin

Working in equal parts Lovecraftian and Religious horror, Cardin is a master at building tension toward a horrible revelation. To Rouse Leviathan is a collection of short stories that all explore similar themes. That effect dulled as I metered this book out over quite a few months. So if you find that the stories are treading some of the same paths, just set the book down and come back in a few weeks. It's one of the strengths of anthologies.

Cardin's prose can be a bit stiff in places, but he's excellent at setting the mood. As the title implies, each of these stories marches toward some apocalypse, some global and others personal. It's a tight horror anthology that stays away from the worst tendencies of genre fiction; these aren't morality plays, nor are they world-building with a thin veneer of plot. I am a huge fan of horror that works more in atmosphere than shock, and Cardin does that well.

John Alison's Scary Go Round is a webcomic classic. He mixed humor, soap opera, and the fantastic in ways that always surprising and entertaining. Steeple works in a similar vein, though without space to fully stretch out on endless digital pages. 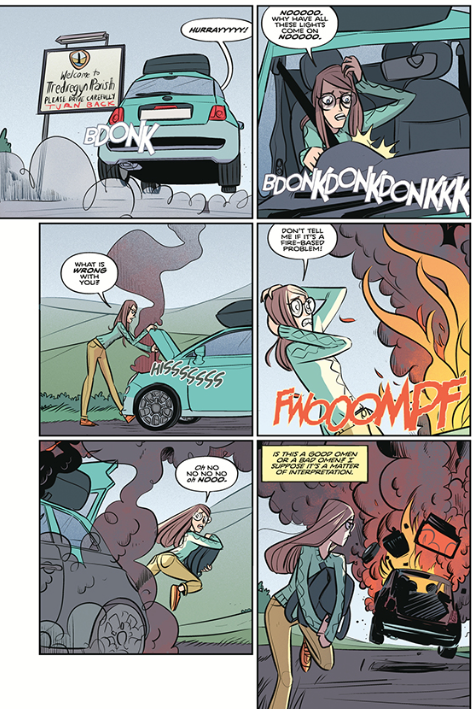 So be prepared for a bit of a careening vibe to the storytelling. You'll move from character building and exposition to quick action and resolution. Billie, a small-town vicar, has an unlikely friendship with Maggie, a priestess in Satan's church. There's a Reverand battling Mermen on the cliffs of the sea, a cult attempting to bring about the world's end, and a host of other weird adventures mixed in. If it seems sweeping, it is.

However, it all works because Alison is excellent with characters and settings. His art style is a nice mix between realism and comic strip style. It's just a shame that there isn't the space to let all of these stories get their own arc. Five issues really make this story feel cramped, but the characters are all charming enough that it's still worth checking out.

Bowie was excellent at weaving his myth, even turning is death in a final bit of theater. However, the Berlin period with Iggy Pop and Brian Eno is the epic set amongst the myth. Low cast a shadow long enough that entire genres supposedly owe their existence to that single record. It's a pretty well-known period in his output.

Wilkerson starts with Station to Station, and Bowie's first attempts at a film career. He then weaves in the exploration of that album's themes with Bowie's increasing cocaine use with the reason Bowie heads to Berlin with Iggy Pop in tow. The myths mix with a textual exploration of the album itself and what it all means.

Wilkerson doesn't mine much out of Low that hasn't been thoroughly explored. Mostly this would have been a fun and quick read, if not for that fact that Wilkerson keeps using autistic as a pejorative for Bowie's more alienating and asshole tendencies. A coked-out rock star is not autistic, and trying to frame his behavior as such is pretty shitty.

As someone who loved Vertigo in the '90s, Ice Cream Man is weaponized to pander to my nostalgia. A horror anthology series that is only bound together through the titular Ice Cream Man, these tales are all unsettling and atmospheric in the best ways. W. Maxwell Prince has a lot of fun here, working in different genres and tones. Each issue's world feels realized and the characters believable. 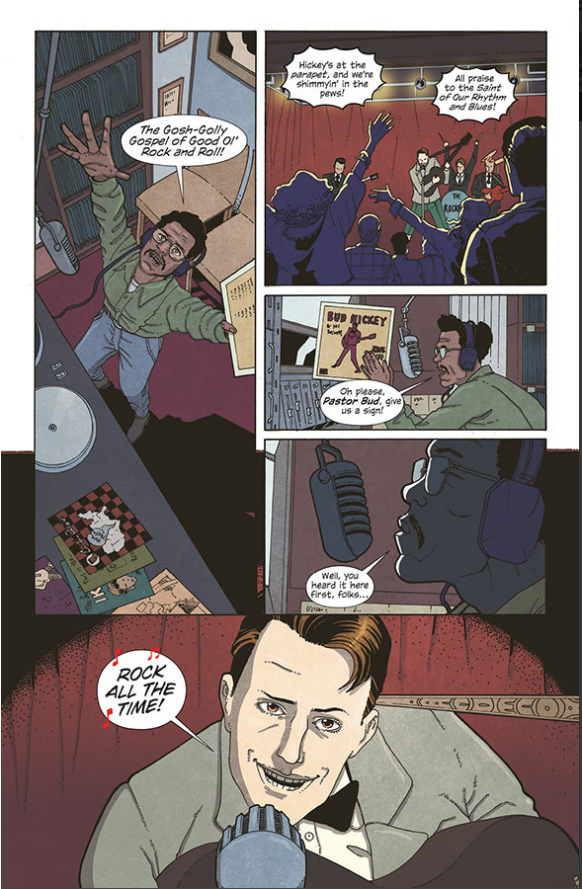 The stories cover a lot of ground. My highpoint is the story of a one-hit-wonder that could never write another hit has to save the world by writing another song. Yet, each of the four issues is entirely different in tone and feel. The art team of Martin Morazzo and Chris O'Halloran are great at keeping a consistent style but tweaking just enough to ensure each story feels like its own world.

The pitch of a slightly evil Ice Cream Man dealing out people's just desserts, pun intended, should be enough to sell the right kind of reader on the series. (I know I'm behind the curve on this one, and will recommend the same creative team's excellent Quarantine Comix from earlier this year.)

Hank Green deciding to write a novel was never going to be easy. He'd face inevitable comparisons to his brother John. As a YouTube star, there's be the scrutiny that he was only published because he was famous in another medium. He sidesteps the first one by making his debut novel science fiction, and the second by clearly making this a story about the weirdness of being famous for being yourself.

This book was a perfect summer read. It's breezy; the chapters toss you along through the plot. April May becomes famous for finding Carl, an alien sculpture. The discovery rockets her to fame, not just online, but in traditional media too. Trying to find out what the Carls are here to find out becomes an international mystery. Green mixes this with musings about the nature of media and how fame changes you. An Absolutely Remarkable Thing is also one of the few books about living and working online that manages to capture the culture correctly.

The Carls do change everything. The presence of an extraterrestrial creation is a mystery that transfixes the world. As April and her friends discover more detail, they also find a shared dreamworld across the whole planet. This provokes reactionaries that resemble a group of online assholes that shall not be named, bringing a dose of the real world culture wars into the story. However, any narrative about online life is incomplete without addressing culture war noise.

April is an excellent character. Green's adept at making her conversational with the reader in a way that sells her charisma. You get the voice of someone talking to the camera, that touch of personality that defines YouTube as a format. I'm already onto the sequel to this book, but this was a fantastic read. It does end on a bit of a cliffhanger, which made me glad I already had the second book to pick up.

Now, this is a series I was really sleeping on. For pretty much my entire life, in fact. I found out about this series from the YouTube channel Strange Brian Parts. (Itself shouted out by the always-awesome Alex Kennedy.) I'll link the video above because it does a better job of selling the series than I can. American Flagg is a criminally underrated book and should be right up there with Watchmen, and The Dark Knight Returns as an example of the evolution of comics in the '80s. 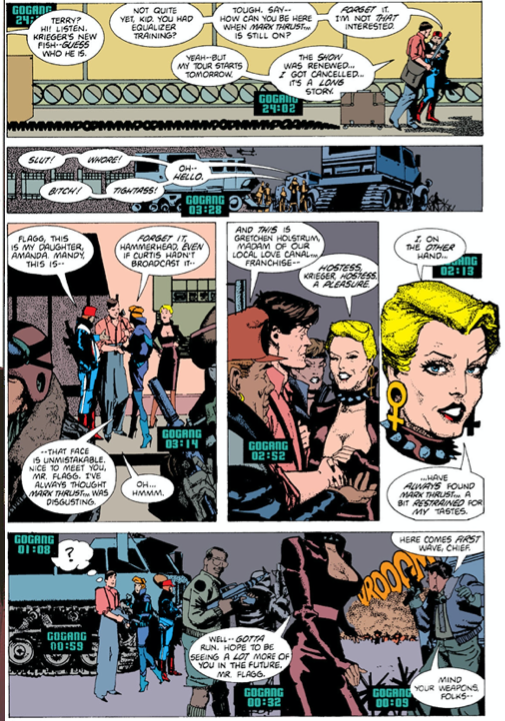 It's got more in common with Gibson's Neuromancer or Rudy Rucker's *ware series than with Watchmen or DKR. Flagg is peppered with in-world media, slang, and cultures that you're just supposed to roll with. In the first few issues, you get some expositional drops about the state of world affairs, but for the most part, Chaykin is keen on letting you pick up on it through context.

This book is a herculean effort of comics. Written and drawn by a Chaykin solo, it would have been acceptable for this book to be a 1/3 as detailed as it is. Instead, it's wild: every page is full of action and colors, and the characters all have unique personalities. Chaykin wanted to break out of the superhero mold, and he does it spectacularly. It's a bit dated in a few ways, but no more than most '80's comics. This sci-fi masterpiece is the forerunner to creator-owned epics like Saga and The Walking Dead. Don't skip this.